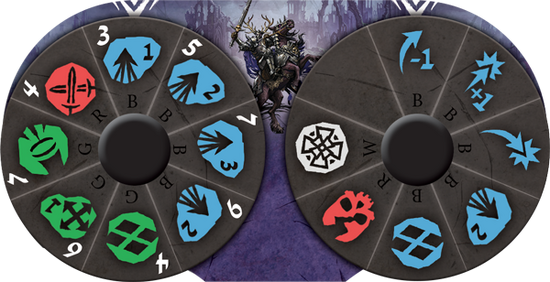 While defending, subtract (one) {Mortal Strike}.

Among of the most renowned and feared of the forces of Waiqar the Undying are the infamous Death Knights, called the Dread Horsemen by some and Doomriders by others.

Serving as the unholy counterparts to the mounted knights of mortal realms, the Death Knights are capable of fighting on long past the limits of mortal men. Possessing none of the weaknesses of living flesh, Death Knights know nothing of hunger, fatigue, or fear. Similarly, the vampiric steeds of these dread riders are capable of speed and stamina far beyond even the greatest stallion, particularly when they have caught the scent of fear or blood in the wind. When the Equius Cumir must feed, they are known to devour the flesh of man and Elf alike, sating their terrible hunger on the corpse-laden fields of battle.

Death Knights are first generation Reanimates, created from the fallen bones of defeated Deathborn Legion warriors, those singular undead who were present at Waiqar’s betrayal and were bound to him forever. Unlike those of later generations, the Death Knights maintain much of the power and glory of their Deathborn progenitors, quickly honing great skill and cunning in battle shortly after their creation. Although these Death Knights retain none of their memories of the original Deathborn, they are still filled with the malice and hatred felt by their precursors in the moments before their destruction.

Newly arisen Death Knights are awarded armor consecrated in the blood of innocents and entrusted with an Equius Cumir, a vampiric warhorse specially bred in the Mistlands. Over time, a Death Knight and its warhorse form something akin to a bond, as rider and steed share in the glorious ecstasy of violence and death.

Now that Waiqar the Undying has regained his strength, his terrifying forces can leave the safety of their hidden kingdom, the former thirteenth barony, and claim their rightful place as rulers of Terrinoth. As the endless army of the undead emerges from the Mistlands, the Death Knights will lead the assault with pride and revel in the ecstasy of destruction, they are the first sight the enemies of Waiqar witness in battle, as well as the last thing they see before suffering a brutal death.

Unencumbered by morality or compassion, Death Knights will go beyond the acts of even the cruelest living mercenary or warlord in the pursuit of victory. Whether it's cutting down innocents to affect enemy morale or raiding villages simply to force liege lords to spread out their forces, the Death Knights make little distinction between warrior and bystander; all who draw breath are as lambs to the slaughter. To many Death Knights, the act of slaughter is more than just obeying orders—it is the only way they can express their hatred for those not cursed with undeath.

Assemble your undead cavalry. Stampede across the fields of Terrinoth and make the worthless mortals quake with fear!

Retrieved from "https://runewars.fandom.com/wiki/Death_Knights?oldid=4670"
Community content is available under CC-BY-SA unless otherwise noted.