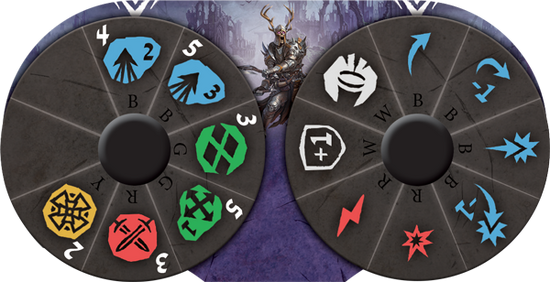 {Melee Attack} This attack is treated as having the {Surge} abilities (both {Melee Attack} and {Ranged Attack}) of allies at range 1-3.

Each unit in your army is treated as having the available upgrades in the row of its costing table with the next highest cost (ignore this, if there is no higher-cost row in that unit's table).

Ardus also gains the {Melee Attack} attack and {Ranged Attack} attack surge abilities from nearby ally units that are on upgrade cards equipped to those units.

Ardus can also resolve a surge ability on an ally’s upgrade card that must be exhausted or discarded. That ally must then exhaust or discard that upgrade card.

Ardus does not gain the {Surge Unique} abilities of nearby allies.

When the Sundermen accompanied Timmorran Lokander back to Terrinoth to confront Llovar Rutonu, they were led by the greatest warriors Al-Kalim could boast. Their commander, Waiqar Sumarion, gathered about himself a small cabal of captains who formed a company of brave comapnions. Ardus Ix'Erebus was one of that elite band.

Ardus Ix'Erebus was a cold, methodical commander. His victories were many, but often more costly than some might have hoped. Throughout that terrible war, Ix'Erebus was often tasked with the most difficult objectives. In the climactic battle for Thelgrim Pass, his legion relieved the Dwarven city, shattering the besieging Uthuk Y'llan forces from behind their lines.

When Waiqar led his forces onto the Charg'r Wastes in search of Llovar's citadel, Ardus Ix'Erebus was forced to remain behind, recovering from grievous wounds. Thus he was not at his lord's side when the Sunderland armies were destroyed in the distant wastelands.

When Waiqar's oath before Meringyr shattered his host, remaking them into the Deathborn Legion, Ardus Ix'Erebus was beside him. Since that day, he has been one of the Mistland's most renowned generals.

Retrieved from "https://runewars.fandom.com/wiki/Ardus_Ix%27Erebus?oldid=4619"
Community content is available under CC-BY-SA unless otherwise noted.